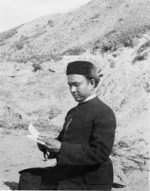 When he was only three years old his mother died and when he was twelve years old his father passed away. He was looked after by his elder brother and his wife. His sister-in-law in particular treated him like her own son and looked after him with great love and affection. Throughout his life Turiyananda was very grateful to her. At school Hari was a very good student but his real interest was spirituality and sports. Even from that young age, in order to practice spirituality in the real sense of the term, he was leading a life of continence in thought, word and deed. In order to keep his mind pure he reduced his sleep and spent many hours in meditation. Reflecting on this period of his life Turiyananda later said, “I do not think I ever slept longer than three or four hours at night. The first part of the night I passed in meditation. Then I decided that sleep was an obstacle. So I used to sit up and watch the train of my thoughts. As a result my mind began to discriminate continuously between the eternal and the non-eternal. Then I could sleep no more. I thought within myself, “Am I losing my mind?” I began to pray that I might sleep. But within me was a current of joy, as if someone were saying, “But don’t you want to discriminate like this?”…”(1)

After he became a monk Turiyananda wanted to spend his time living in solitude, meditating intensively, studying the scriptures and visiting holy places. Like a true monk he wanted to depend on God for food and shelter. Keeping this in mind he left the monastery in Calcutta and travelling by foot he went to the Himalayas. On the way he visited many holy places. Thus he spent many years as a wandering monk. If he liked a place and its quite surroundings he would settle there for a few months and spend his time in meditation and study of the scriptures. . ‘During that period,’ he later recalled, ‘my mind always stayed on a high level. There was a constant stream of God consciousness, unbroken like the flow of oil from one vessel to another. I used to get up at dawn, finish my ablutions, and sit for meditation. After meditating for some hours, I started reading the scriptures. Then it was time to go out to collect food, which was done very quickly. Next came some rest, after which I meditated until evening. No other thoughts were allowed to enter the mind. During that period I committed to memory eight of the principal Upanishads, all except the two longer ones. Whenever I found an Upanishadic verse which particularly appealed to me, I used to meditate on it. Oh, what a joy this produced! I cannot describe it…Whenever I concentrated on a verse, I used to get new and fresh interpretations.’(2)

Turiyananda was an ascetic to the extreme yet he was very sympathetic to others, he was an intellectual who had mastered many Indian scriptures in Sanskrit and the Bible but his heart was full of tender devotion. Even though he was brought up in an orthodox Hindu culture yet he had a very modern outlook. One winter when he was in New York, he and a student of his were walking on a street covered with snow. They came across a large pond where they saw boys and girls skating on the ice. The kids were calling and shouting and pursuing each other in great fun. Seeing this Turiyananda remarked to his student, “That’s why you people are so healthy and strong. Look at the girls skating with the boys. What freedom! Wish it were so in my country. So innocent and pure! It is a sight for the gods to behold…”(3)

At Swami Vivekananda’s request Turiyananda came to America to assist him in his work. The first western monk of the Sri Ramakrishna order, Swami Atulananda, says of Turiyananda when he saw him for the first time, “The Indian atmosphere still seemed to hover about him, as he was far from being Americanized. He represented India as the old students pictured her – the land of simplicity, meditation, and spirituality. Gentle, cheerful, meditative, little concerned about the things of this world, Swami Turiyananda made a deep impression on the minds of those who took Vedanta most seriously – not merely as a philosophy to satisfy the intellect alone, but also as a practical guidance in their spiritual life.”(4)

As a young boy, when Turiyananda was at school he was always reading and practicing Vedanta. He constantly tried to remember that he was the Atman (soul) and not the body. He would wake up early in the morning around 3.30 A.M. and go to take a bath in the Ganges river that flowed near his home. One day when he was taking his morning bath in the river an event occurred which strengthened him in his developing spiritual ideals. Recounting this incident Turiyananda later said, “…One day I was to bathe as usual and I was in the river. I saw an object floating in the water. It was still dark, so that I could not distinguish it. Some people on the shore, however, recognized the object as a crocodile. They shouted, “Come out quickly! That is a crocodile coming towards you!” Instinctively I rushed to the shore. But as soon as I got out, I thought to myself, “What are you doing? You are repeating day and night, Soham! Soham! I am He! I am He! And now all of a sudden you forget your ideal (you are the soul) and think you are the body! Shame on you!” I thought, Shiva, Shiva! That is true.” And immediately I went back. The crocodile never bothered to come near me. I bathed as usual. But I noticed I was hurrying to get through my bath quickly. Then I said to myself: “No I shall not hurry; I shall take my bath as usual.” And so I did.’(5)

Once while in the Himalayan region called Tihiri-Garhwal, Turiyananda was living in a thatched hut that had a broken door. One night he heard the villagers cry, “Tiger! Tigrt!” He immediately put some bricks behind the door to protect himself. Just then he remembered a passage from the Taittiriya Upanishad that declares that even at the command of Brahman the god of death does his duty like a slave. His awareness of the Atman awakened, and defeated the body idea. He kicked the piles of brick away from the entrance, and meditation. Fortunately, the tiger did not show up.(6)

Once when Turiyananda was wondering in the northern part of India he happened to enter a city called Mathura. In this city of Mathura there happened to be a noble minded rich merchant who took upon himself the task of feeding wandering monks who came to his city. Turiyananda came to know of this merchant and being hungry went to his house hoping to get some good food to eat. He was provided with a nice meal. After Turiyananda had his meal the merchant approached him and asked him, “Will you please tell me how I can develop dispassion?” At this Turiyananda smiled and said, “You are asking me this question. Do you think I would have come to eat here if I really had dispassion?”(7)