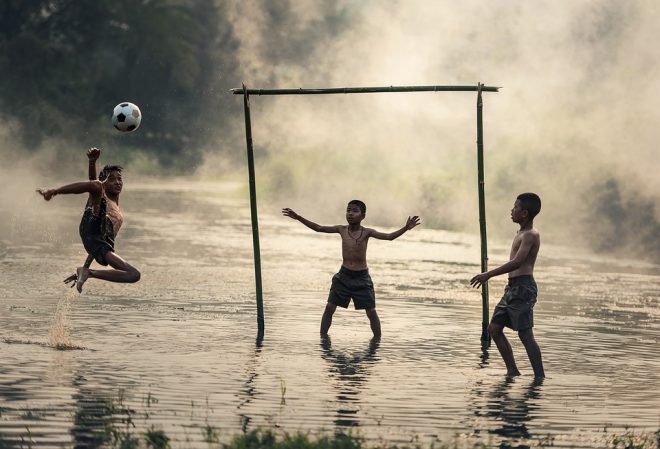 Bahir was a very old disciple, but in the evening of his life, he was getting a lot of inspiration from visiting disciples and ashrams around the world.

On one occasion, Bahir visited an Ashram in a beautiful town. They had invited disciples from many other countries to come and participate in a weekend of spiritual activities. During the weekend retreat, the disciples had organised meditations, soulful singing, readings of the Master’s writings and a few meetings to talk about how they could spread their Master’s light.

After the final meditation, the main organiser announced.

“Now we are very lucky to have Bahir today. Bahir has been following the spiritual life for 60 years [cheers from the audience!] and he spent considerable time with the Master in the physical. Now Bahir is kindly going to come up and share a few stories.”

Bahir felt a knot in his stomach; nobody had told him this was on the programme. He didn’t mind speaking to groups of five or six people. But, telling stories to 600+ people was something he definitely had not prepared for. But, before he had time to think and run for cover, his old friend Malin was leading him up to the microphone.

Bahir looked out at the 600 expectant faces, and thought ‘O dear.’

Not knowing what to say Bahir began by sincerely appreciating the energy and enthusiasm of the disciples.

“It has really been a marvellous weekend, and I feel re-energised in my own spiritual life to feel such aspiration and feeling of oneness with the Master’s path.”

“I have truly enjoyed this weekend of spiritual activities but – if there is one thing which would add even more to the weekend – it would be to have a few fun games. As you know, I’m a very old man, but I like games because – at least for a short-time – I can pretend to be a seven-year-old boy again! As you know, our Master definitely appreciated when we had these weekend retreats because he saw how much they helped our spiritual life. But also, he often mentioned the value of having games because they are an opportunity to bring to the fore our childlike qualities. No matter how old we are, if we can participate and enter into the spirit of the games – our anxieties and worries disappear. The Master would often say when the disciples had this kind of innocent joy, it was such a weight off his shoulders.”

“It reminded me of a story many years ago. We were with our Master in a foreign country, and after a soulful morning meditation, there was free time in the afternoon. One group of boys began to play football and had an epic two-hour game. Nearby, another group of boys had a meeting on the grass where they talked about future projects to spread the Master’s light. Now it happened that those in the meeting were disturbed by the football game and so one of those disciples complained to the Master that their meeting had been disrupted.”

“However, the Master didn’t react as they expected. The Master said ‘The boys playing football are doing absolutely the right thing. By playing football, so many wrong forces and negative thoughts they are leaving behind on the pitch. I appreciate the intent of those disciples trying to spread my light. But, everything has its time and place. It’s such a beautiful afternoon; we should take the opportunity for sport and relaxation. Also, forgive me for saying, but when I hear the word ‘meeting’ – in no way does it inspire me! Did the great Swami Vivekananda shake up the world by having meetings and talking about his plans? No. Vivekananda simply did. So please don’t worry about planning and discussing – instead throw yourself into a vortex of self-giving service.’”

Bahir was now in full flow, so he felt confident to tell another story.

“It reminds me of another time when I was seeing the Master for the first or second time. Disciples from our country were honouring, in a light-hearted fashion, some achievement of the Master from when he had been visiting New Zealand. I can’t remember why – but someone had the idea to put white socks on our ears so we would look like sheep while performing.

“In all sincerity, I thought this was absolutely the worst idea. I was seeing my Master for the first time, and here I was putting socks on my ears. One or two of the older disciples refused, and I would have joined them but I was a new disciple, so I went along with it. Well, after the performance, the Master smiled, and he gently teased those older disciples who were standing at the end of the line – ‘eh Taruk and Gopal, do you not have any ears, like everyone else!?’ Ironically, they then looked a bit sheepish! Whether the Master genuinely appreciated our costume or not, we will never know. He wouldn’t always say what he really felt about performances! But I felt I did the right thing by joining in with the spirit of the performance – even if my mind didn’t fully agree.”

“On that first trip to meet my Master, I learnt that everything has its time and place. A few days later we were performing some soulful songs at an evening meditation. We dressed in immaculate white clothes and, before going on stage, we meditated in silence for a minute. The short five-minute performance was a most soulful and memorable experience. The Master was in a sublime trance, and I was deeply moved by the atmosphere and ineffable peace emanating from the Master’s presence. After the performance concluded, there was an indescribable hush as we absorbed the Master’s final moments of silence. I felt I had climbed up at least half a step to Heaven and, as I went back to my seat, I sat in silence trying to absorb the experience.”

“So when we play games, we should be in an innocent, childlike frame of mind and simply have joy. When we meditate – that is the time for silence and soulfulness.”

“My good friend Jahangir once told me an illumining story. He was with the Master and a few disciples seated on the curb of a pavement. The Master suddenly said. ‘Please try go into your highest meditation.’ So the boys tried to meditate to their best of their ability. Then after a few minutes, the Master said. ‘Jahangir, please tell us a funny joke.’ Which he did, and then the Master said, ‘now please try go back to your highest meditation.’ Then after a few minutes, he asked for a joke. Like this it went on – high meditation, then humour.

What was the Master trying to achieve with this unique and unusual experience? The way I understand it, the Master wanted to show us that we shouldn’t limit the spiritual life and try put into a neat box. Spirituality is not just sitting at our shrine and meditating for a set number of minutes. We always have to be ready to do what our Master wants. If the Master wants us to meditate, we should put our heart and soul into meditation. If the Master wants us to put on plays or tell jokes, we should put our heart and soul into that. Above all, the Master’s path is not about following our own preconceptions of what we think spirituality should be. The final thing is that everything has its time and place. Serious and soulful meditation is an absolute necessity in the spiritual life, but humour and innocent fun also have their role. If we are always serious, we can become dry and inflexible. If we are always joking – there is no soulfulness or devotion. We shouldn’t neglect either. The spiritual life needs balance.”

“If there is one thing I miss about the Master leaving the body – it is that spontaneity and the variety of divine moods the Master could display. Somedays the Master would come to our meeting place and it would be real seriousness – soulful meditation, lofty, illumining talks and you felt the presence of divine light, divine transformation and your own eager promise to make a renewed commitment to the spiritual life. But, on other days, the Master would come and it would be all sweetness – ‘juicy stories’, humorous skits and innocent fun. Then the Master became like a grandfather figure – all compassion, love and forgiveness.

Sometimes we would get these different aspects all within the same day. You never knew what was coming next – it was impossible to predict. You just entered into the flow of the Master’s divine Lila – his divine play on earth.”

Bahir paused. It could be his imagination but he felt the living presence of his Master in the room, as if the clock had wound back 60 years to one of those functions he was describing. The feeling, light and consciousness of those precious days was coming rushing back. He inwardly offered gratitude to his Master and slipped away from the stage.

Joy
Is indispensable
In our spirituality-life.

The importance of cleanliness and tidiness