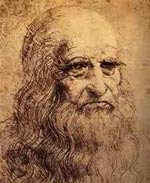 Leonardo da Vinci was a remarkable man. A man of both science and art, who matched a ceaseless creativity with a passion and devotion for discovering the wonders and beauty of life.

In art, Da Vinci left humanity the immortal Mona Lisa, which offered a glimpse of the Transcendent in the human-form. Da Vinci was also a pioneering and original thinker, who transcended his lifetime and even the Renaissance – to leave ideas which are both timeless and illumining. These are a few selected quotes which reveal the inner spirituality of a man who was unconcerned with any outer display of piety.

“Here forms, here colours, here the character of every part of the universe are concentrated to a point; and that point is so marvellous a thing … Oh! marvellous, O stupendous Necessity — by thy laws thou dost compel every effect to be the direct result of its cause, by the shortest path. These are miracles…”

“Love shows itself more in adversity than in prosperity; as light does, which shines most where the place is darkest.”

Like unto this is the love of virtue. It never looks at any vile or base thing, but rather clings always to pure and virtuous things and takes up its abode in a noble heart; as the birds do in green woods on flowery branches.

“My works are the issue of pure and simple experience, who is the one true mistress.”

“To lie is so vile, that even if it were in speaking well of godly things it would take off something from God’s grace; and Truth is so excellent, that if it praises but small things they become noble.”

“Things that are separate shall be united and acquire such virtue that they will restore to man his lost memory.”

“The part always has a tendency to reunite with its whole in order to escape from its imperfection.”

We are apt to think of miracles as something unexpected, shocking and fascinating. But Da Vinci sees miracles in the simplicity of the natural world. This is the sign of a mystic – not someone who endeavours to escape the world, but someone who can see and feel the underlying beauty and unity of the world around us.

In secret, Da Vinci cut open human bodies to discover the inner workings of the human body. But, dissection was only part of his understanding. He saw, through the myriad operations of life, how the ultimate goal was to evolve from separation back to unity.

Da Vinci did not get caught up in the religious dogmas of the day. He rarely invoked God directly; to Da Vinci, his religion was the Truth. For seeking the truth would ultimately lead to the true understanding and the emotions of divine love and beauty.