There once lived in America a very great spiritual Master who had only twenty-five disciples. Nine of the disciples lived in the same city as the Master. The others lived in neighbouring cities. One day the Master decided to take a journey to one of his other Centres. Since the Master was not sure that he would return by the time the evening meditation was to start, he had to find somebody to conduct the meeting. One of his disciples, a middle-aged man named Rakhal, asked the Master if he could do it.

That night Rakhal conducted his first meeting since he had lost all his followers. Now, Rakhal was ego incarnate and he insisted on conducting the meeting in his own way. He said, “Everybody will sit around the table and hold hands. In this way we will form a ring so that the hostile forces can’t come.”

Some of the disciples who had not known Rakhal when he was a Guru in his own right began to protest. “This is not the way the Master conducts meetings,” they said.

“I know what is best. Master told me to conduct the meeting, and he gave me the inner message about how he wants it done,” said Rakhal.

So they sat around a table and held hands and then Rakhal said, “Now let us invoke the Master’s spirit seven times. If we invoke him, then the hostile forces will leave us.”

One of the women in the group said, “Leave us? When did they ever attack us?”

Rakhal said, “The hostile forces always attack us. They are always there, so the first thing we have to do is throw them out.”

The group began invoking the Master while they were holding one another’s hands. Then, each time they chanted the Master’s name, they slapped their hands down on the table. Each chant was louder and more powerful than the preceding one and they began slapping the table harder and harder.

By the fifth time Rakhal was getting carried away and he was shouting the Master’s name as loud as he could and pounding the table with all his might. Right next to him was a very rich elderly lady. Suddenly he pressed her hand so hard that she let out a scream.

But the lady became furious and she picked up her shoe and struck Rakhal on the knee with its heel. Then he let out a scream and a real shouting match began. It was at this point that the Master walked into the room. He was shocked beyond belief. “Is this the kind of meeting you conduct in my absence?” he asked.

“No, Master,” said Rakhal. “It is all her fault. Here we were trying to invoke your presence so soulfully and all of a sudden she starts screaming and carrying on like anything.”

The lady was so angry she could hardly speak. She came up to the Master and said, “That brute almost broke my hand. He was pressing my hand so hard when we were chanting your name that I thought it was going to break. Is this the way you told him to invoke you? What kind of Master are you, anyway?”

The poor Master had just come from a most sublime meditation in a neighbouring city. During the meditation he had gone into a very high /Samadhi/, and even now it was difficult for him to come down. But to come down into this was really unbearable. From where to where! Finally he asked everybody to go home and said he would discuss the matter with them all the next day.

The next evening, Rakhal came into the Centre with a big bandage around his knee. And the elderly lady came in with her hand in a sling. Neither one was speaking to the other and they wouldn’t even look at one another. Each was waiting for the Master to take his side and criticise the other mercilessly.

When the Master came into the room, he made no mention of the previous day’s incident, but went into a high meditation. The whole evening the Master remained in /Samadhi/ and afterwards there was such a peace in the room that no one could even speak. Everybody filed out of the meditation room in silence.

The next time they met together, the lady’s hand seemed miraculously cured and Rakhal no longer had his leg wrapped in a bandage. Neither one mentioned the incident again and it was soon forgotten. 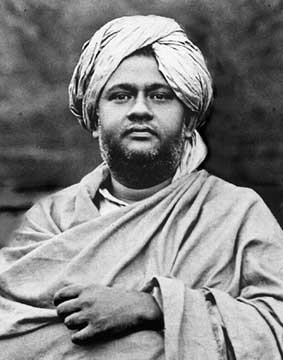 This reminds me of a story from the book ‘Reminiscences of Swami Brahmananda: The Mind-Born Son of Sri Ramakrishna‘ by Swami Bhaskarananda (Author) After Vivekananda’s passing, there was conflict in an ashram of Sri Ramakrishna devotees between those who felt they were not following what Swami Vivekananda would have wanted. Swami Brahmananda went to mediate the situation. However, on arrival he didn’t say anything, but went into meditation for a couple of hours. Then after meditation, he asked for the monks to join him in devotional singing. Those in the ashram became absorbed in the spiritual mood of the meditation and devotional singing. The next day, Swami Brahmananda lightly broached the subject of some areas of misunderstanding, but it was very easy to bring the devotees together in harmony.

That is often the best way to resolve disputes, don’t try to work it out with arguments, but meditate and change the consciousness.

Beggars and workers – Story from Wisdom of the Idiots