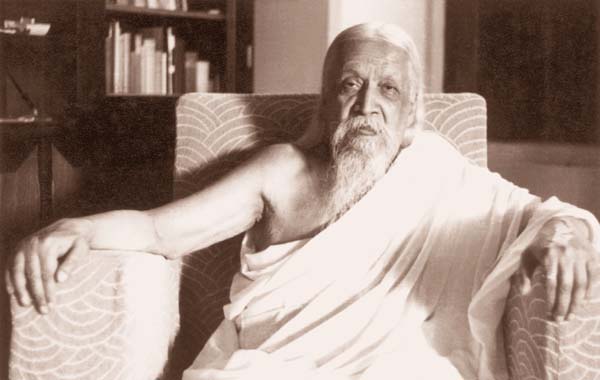 Sri Aurobindo spent his formative years in England studying at St Paul’s and Trinity College where he excelled in the study of Literature and the Classics. In 1892 he returned to India where he became heavily involved in the Indian independence movement. He was a natural leader and one of the most radical nationalist politicians. Because of his radicalism, in 1908, Sri Aurobindo was arrested on suspicion of being involved in a bomb plot and was remanded in Alipore jail. It was here in jail that Sri Aurobindo had significant spiritual experiences; he became aware of a divine inner guidance and also realised the omnipresence of God even in a darkened prison cell.

Due to the commitment of Sri Aurobindo’s lawyer C.R.Das, Sri Aurobindo was released without charge. However this experience changed Sri Aurobindo’s outlook. Henceforth he retired from politics and focused his energies on spirituality.

Sri Aurobindo travelled to Pondicherry, South India where he could practise yoga undisturbed. In 1914 he was later joined by a French woman, Mira Richards who would later became known as the Mother of the Sri Aurobindo Ashram. Together they founded the Sri Aurobindo ashram, which began to attract disciples attracted to their dynamic reinterpretation of yoga.

As well as being a spiritual Guru to many disciples, Sri Aurobindo was a noted poet, philosopher and writer. His main works were The Life Divine, The Synthesis of Yoga, Essays on the Gita and Savitri. Savitri was an epic work of poetry that he worked on for over 20 years.

“Arise, transcend Thyself,
Thou art man and the whole nature of man
Is to become more than himself.”

A significant event occurred in 1947 when India attained full independence. This was a goal Sri Aurobindo had continued to aspire for, despite his retreat from politics. Independence was also achieved on his birthday 15th August. His speech about this momentous occasion can be viewed here: Indian Independence.

For over 40 years, Sri Aurobindo worked tirelessly for his vision of a divine life on earth. Through his writings and poetry he left a legacy which reflected his hopes of a golden future for humanity. Sri Aurobindo entered mahasamadhi on Dec 5th, 1950.

Books about Sri Aurobindo at Amazon.com

Miraaura.org
– A site dedicated to the integral yoga of Sri Aurobindo and the Mother

Search for Light.org
– Collection of writings, music and poetry by Sri Aurobindo and the Mother

Light Endless Light The Mother on Aphorisms of Sri Aurobindo