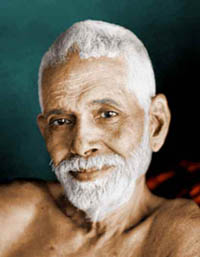 I first came to know about Ramana Maharshithrough reading a book by Paul Brunton A Search in Secret India. Paul Brunton was an Englishman who in the 1930s travelled to India in the hope of a finding illumination from India’s rich spiritual traditions. The book recounts how the author met many fascinating and unusual characters; fakirs, magicians, astrologers and holy men. However despite meeting with a myriad of unusual and thought provoking characters they had been unable to satisfy his inner hunger. As P.Bruntonwas considering to leave India he was at thelast drawn to the holy mountain of Arunachala. It was here in Arunachala where he met the great Sage Ramana Maharshi.

Ramana Maharshi was to have a profound, uplifting effect on the tired traveller. As P.Brunton said during his stay with the Maharishee (R.Maharshi)

I never fail to become gradually aware of the mysterious atmosphere of the placeâ&#128;¦ I enjoy an ineffable tranquillity merely by sitting for a while in the neighbourhood of the Maharishee.

At last through the inspiration of Ramana Maharshi P.Brunton was able to direct his thought inwards to experience a memorable revelation of his inner self.

Ramana Maharshi was born in 1879 near to Madura in South India. For the first 16 years of his life he was a normal child, with a keen interest in his studies and sports. However at a certain point he became struck with an unusual, yet overwhelming fear of death. Lying in his own room he became acutely aware of the inevitability of death and the mortality of his own body. However this paralysing fear proved to be only transient. With another penetrating insight he became aware that I am not the Body The real I was beyond matter. He was not a body but spirit. It was just that up until that point he had ignored this I or inner self.

With this glimpse of a higher, immortal consciousness the Maharshi lost all interest in his worldly life, he was plunged into a period of intense meditation on the nature of Who am I Absorbed in contemplations of a higher consciousness Ramana no longer felt any reason to stay in his home town. Instead he was magnetically drawn to the holy mountain of Arunachala, whose name alone, held a mantric appeal to Ramana Maharshi. Arunachala was to become the home for Ramana Maharshi for the rest of his life and the mountain was to be inexorably linked to his own sadhana and self. 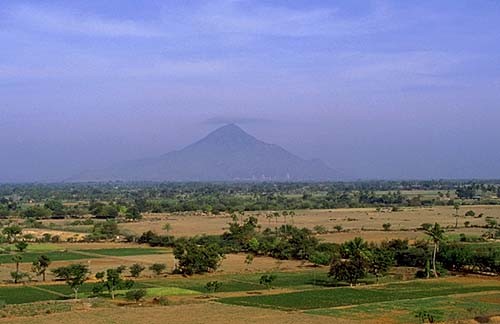 (Photo of Arunachala in the distance)

For several years Ramana maintained a virtual silence because he was so absorbed in his interior meditations. Despite leading the most simple of lives and barely communicating, a group of devoted seekers began to be drawn to the mystical aura of this young sage. Thus gradually an ashram was built around him on the foothills of Arunachala and Ramana Maharshi would start to teach those who came, although he never claimed to be anybody’s Guru. After 2 years his mother came to visit Ramana, tearfully pleading with him to return home. Despite this Ramana was unmoved maintaining a calm meditative expression. Finally he answered that sometimes a higher power controls the fate of men and whatever she said could not change his destiny. (After her other children died several years later, his mother would return and eventually became a devoted disciple of her own son and remained in Arunachala for the last 6 years of her life)

Ramana Maharshihad no formal training in Yoga, he was entirely self taught, receiving only guidance from his own inner pilot, but so unique and powerful were his teachings that learned men well versed in scripture became disciples of Ramana Maharshi. Ramana Maharshi taught a simple path of self inquiry along the lines of Who I am He guidance sadhaks to train their awareness to the source of their thoughts -to their own inner self. Because of this Ramana Maharshi was often viewed as a Jnani (Man of knowledge) however he also had a strong devotional aspect, that is evident in some of his poems

Thou madst me mad to cure me finally
Of madness for this world of fantasy.

As a spider thou wouldst watch me, Lord,
To trap me in thy web of Grace
Till now, when I’m enmeshed, thou com’st
And feed’st on me, O Blessedness!

Ramana Maharshi was compassion and forgiveness incarnate. There is a story told that once burglars came to the ashram. They were so incensed there was nothing worth stealing that they started to hit Ramana. However the great Sage displayed no sense of anger, he even offered the burglars some food before they left. (A year later they were caught for similar crimes and sent to jail) Ramana only felt pity for their state of ignorance.

Ramana Maharshi also had a wonderful relationship with animals. Many wild animals such as Tigers and snakes roamed the mountain side but the Maharishi never showed any signs of fear and often befriended animals who came in contact with him. A disciple recorded that on one instance a black cobra entered a hut where the Maharshi was staying, the snake stopped and stared into the eyes of Ramana, after a while the snake retreated. A realized soul maintains a close oneness with all of God’s creation and this compassion can sensed by the animals themselves. The ability to befriend animals is somewhat reminiscent of St Francis of Assissi who had a similar touch with animals.

Sri Aurbindosaid that Ramana Maharshi’s tapasya (spiritual practice) was a shining light of India. Many seekers benefited from his spiritual aura of peace, enabling sadhaks to attain a higher state of consciousess. Dilip Kumar Roy, a disciple of Sri Aurobindo, spent 5 days at Arunachala and had the opportunity to meditate and meet with the Maharishi.

I saw indeed a man who, outwardly, was anything but distinguished, still less handsome or captivating, and yet.. how shall I put itâ&#128;¦ he was so compelling, so disarmingâ&#128;¦ And then what peace I felt!

Sri Ramana Maharshi taught a simple path of self enquiry along the ideas of Who am I? He could be dismissive of complex metaphysical questions and teasing of those who wanted to solve the problems of the world.

My friend, when you are in abysmal ignorance about such a fundamental reality as your own self, why waste your time over such monumental metaphysical questions?

Paul Brunton once asked the sage

For the last 2 years of his life the Maharshi suffered from cancer and experienced great physical pain, but even towards the end he maintained the same tranquil poise and self same radiant smile. When he was suffering from cancer in the arm a disciple ran away crying because he could not bear to see his master in pain. Ramana only smiled and spoke to a disciple nearby.

Duraswami is crying because he thinks I am suffering agonies! My body is suffering but I am not suffering. When will he realise that I am not this body?

Ramana Maharshi passed away in 1950 aged 70. An ashram is maintained at Arunachala, his teachings have spread all over the world. He is now widely regarded as being of one India’s foremost Saints of the last century