Desmond Tutu was born in 1931 in a small mining town in Transvaal. He studied to be a teacher like his father but due to the segregated nature of South African education, Tutu was encouraged to enter the church. After a period of training in England, Desmond Tutu was appointed the first black Archbishop of Johannesburg in 1975.

Desmond Tutu became one of South Africa’s most outspoken critics of apartheid. He said he was motivated by religious teachings rather than a desire to enter into politics but his strong views clashed with the apartheid State. He says he was influenced in his views by many white clergymen in the country, who were also strong opponents of apartheid such as Bishop Trevor Huddleston. The Archbishop consistently told the South African government that apartheid was contrary to the will of God and was doomed to failure. However, as well as being a strong critic of apartheid Desmond Tutu has also stressed the need for reconciliation and forgiveness between the different parties associated with apartheid.

“Do your little bit of good where you are; it’s those little bits of good put together that overwhelm the world.”
― Desmond Tutu

In 1978 he became Secretary-General of South African Council of Churches this gave him the opportunity to continue his work against apartheid. In 1984 he was awarded the Nobel Peace Prize, the Nobel Committee cited his “role as a unifying leader figure in the campaign to resolve the problem of apartheid in South Africa.”

“When we see others as the enemy, we risk becoming what we hate. When we oppress others, we end up oppressing ourselves. All of our humanity is dependent upon recognizing the humanity in others.”
― Desmond Tutu 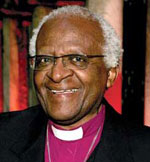 In 1989 FW De Klerk introduced reforms, which led to the downfall of apartheid and the release of Nelson Mandela. Desmond Tutu welcomed these and by 1994 South Africa had its first democratically elected Government with Nelson Mandela elected as President. After the fall of apartheid, Nelson Mandela appointed Desmond Tutu to be head of the Truth and Reconciliation Committee, which sought to deal with crimes, committed during the apartheid era. This proved to be a difficult process uncovering many painful experiences

Desmond Tutu is an international figure of high regard. He often speaks out on behalf of oppressed groups around the world. He has been a noted supporter of the Palestinian cause, and the people of East Timor. Recently he has been an outspoken critic of the mistreatment of prisoners at Guantanamo Bay and the dictatorship of Robert Mugabe in Zimbabwe.

Archbishop Demond Tutu reads from the Jewels of Happiness