Santanu was a great king. He ascended the throne when his father died and his elder brother renounced the world to become a Sannyasi, or monk.

Santanu had a special capacity which nobody else had. When he touched a human being, no matter how old the person was, by his mere touch he could transform that person into a strong and vigorous youth. He did it many times and was always successful.

Santanu was very beautiful and also pious, truthful, hard- working and dynamic. He was very fond of hunting and was a great hunter. He especially loved hunting deer. 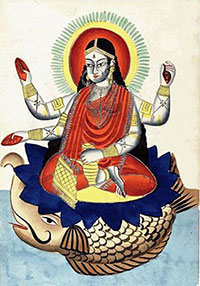 One day, he saw at the bank of the Ganges a most beautiful woman. He became enamoured of her beauty and ran to her saying, “Please tell me who you are. In fact, you don”t have to tell me who you are. Just marry me. I wish to marry you. I am the King. I will give you anything you want just for the asking.”

The beautiful girl, Ganga Devi, said, “Are you sure you will be able to fulfil me in every way?”

“Yes, I can and I shall. Your beauty has captured my heart.”

“All right then, I will marry you on one condition.” “Any condition I shall fulfil.”

“Never, never! I shall not stand in your way. Just be my wife. I will be at your beck and call. Indeed, you are beauty incarnate.”

They were married and both King and Queen were happy. But when they had their first child, the mother threw the child into the Ganges. They had seven children, and as soon as each child was born she threw the infant into the Ganges.

The King knew that if he scolded her or stood in her way, she would leave him because that was the condition she had made. His love for her was boundless, and for fear of losing her, he remained silent.

But when the eighth child was born, he said, “How can you do this? Are you not a human being? You are the child’s mother. How can a mother do this? The mother is supposed to be flooded with love and compassion for her children. You are so cruel, so undivine! How can I keep you as my wife?”

The wife smiled and smiled, ‘so! You have failed to keep your promise. I can”t stay with you any more. I am going and I am taking my son with me. When this child grows into a

She did keep her promise. The name of that eighth child was Vishma, the unparallelled hero of the Mahabharata.

Vishma’s mother was the goddess Ganga who had taken human form. The eight children born to her were the eight Vasus, immortals who had offended the sage Vasishtha. Vasishtha had cursed them. His curse was that they would have to take human birth and live on earth. The Vasus had begged Ganga to come to earth to be their mother but to drown them at birth so their earthly life would be shorter than the shortest. Vasishtha had agreed to this condition for all but the last son to be born. He had been the principal offender against Vasishtha and his fate was to live a long life on earth.

Vishma’s human birth was the result of a curse, but he lived the life of a great hero-warrior.