In 1879, when there was British were ruling in India, Lt. Col. Martin of Agar Malva was leading the army in the war against Afghanistan.

Col. Martin used to regularly send messages of his well-being to his wife. The war continued for long & Lady Martin stopped getting messages. She was very upset.
Once riding on her horse, she passed by the temple of Baijnath Mahadev. She was attracted to the sound of Conch & Mantra. She went inside and came to know that the Brahmanas were worshipping Lord Shiva. They saw her sad face and asked her problem. She explained everything to them. They told her that Lord Shiva listens to the prayers of devotees and takes them out of difficult situations in no time. With the advice of the Brahmanas she started the ‘Laghurudri Anushtthan’ of the Mantra: ‘Om Namah Shivaya’ for 11 days. She prayed to Lord Shiva that if her husband reaches home safely, then she would get the temple renovated.

On the last of the ‘Laghurudri’ a messenger came and gave a letter to her. Her husband had written: ‘I was regularly sending messages to you from the battle grounds but suddenly the Pathans surrounded us from all sides. We were entrapped in a situation where there was no scope of escaping death. Suddenly I saw a Yogi of India with long hair, carrying a weapon with three pointers (Trishul). His personality was amazing and he was maneuvering his weapon with a magnificent style. Seeing this great man, the Pathans started running back. With his grace our bad times turned into moments of victory. This was possible only because of that man of India wearing a lion skin & carrying a three-pointer weapon (Trishul). That great Yogi told me that I should not worry and that he had come to rescue me because he was very pleased with my wife’s prayers.’

Tears of joy were falling down the eyes of Lady Martin’s eyes while reading the letter. Her heart was overwhelmed. She fell into the feet of Lord Shiva’s statue and burst in tears.

After a few weeks Col. Martin returned. Lady Martin narrated the whole incident to him. Now both husband & wife became devotees of Lord Shiva. In 1883 they donated Rs. 15,000 for renovating the temple. The information engraved slab for the same is still there in the Baijnath Mahadev Temple of Agar Malva. This is the only Hindu temple built by the British. 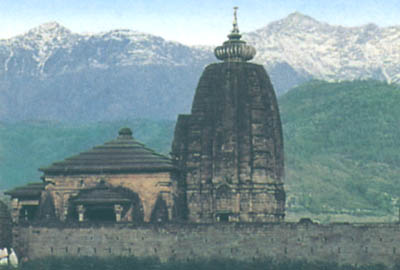 When Lady Martin left for Europe she said that they would make Shiva Temple at their home and pray to Him till the end of life.