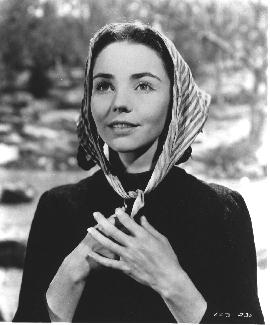 The Song of Bernadette tells how, at the age of 14, Bernadette witnessed the apparition of a beautiful lady. On her last apparition, the young lady finally told her name. She said “I am the Immaculate Conception”. Because Bernadette was badly educated, this meant nothing to her at the time. Unbeknown to Bernadette, the Pope had very recently adopted the words “Immaculate Conception” as part of the Church’s orthodox teachings. Thus, this was seen as a genuine proof of her visions. However, the visions of Bernadette split the community, some felt that Bernadette was genuine; others felt she was a fraud out to gain attention and financial gain.

One of the great strengths of the film lies in the treatment of Bernadette’s visions and subsequent interrogations by various members of the establishment. The police chief was eager to portray Bernadette as a fraud. He questioned her aggressively – hoping to find a contradiction in her answers. Yet, to these questions, Bernadette responded with calm, confidence and real strength in her conviction. Played by Jennifer Jones, Bernadette retained great dignity, with her simplicity and inner strength. Maybe the film slightly overplays the emotion of the prosecutors. But, it certainly was the case, that Bernadette met with real opposition and hostility from some.

The film does differ from the actual life of Bernadette in certain key respects. It is worth examining these, because it gives a greater understanding of the character of St Bernadette. In some ways her life is more inspiring than the miraculous powers claimed for the spring at Lourdes. Bernadette, in her own way, was a real saint. She endured much suffering, frequent sickness and constant questioning of her experiences, but did not grumble or complain in fulfilling her task laid down by God.

The first time the lady spoke to her she said, “I cannot promise you happiness in this life, only in the next..” These words were proved true by the extent of Bernadette’s suffering. The film suggests that the Mother superior was unaware of Bernadette’s illness until shortly before her death. However, this is not true because Bernadette was frequently ill. In fact she was so ill, that on three occasions she was given the last rites before a person passes away; on two of these occasions she came back from near death. The film suggests that one nun, bore a deep grudge towards Bernadette and was only reconciled at the end. This is definitely exaggerated. To some extent Bernadette’s superiors were extra harsh towards her. There was a feeling, that there could be no such thing as too much humility for one who had received such graces as Sister Marie Bernard (Bernadettes’ religious name). Yet, although Bernadette often suffered humiliation, this was part of the religious life she willingly entered. She retained gratitude towards her spiritual sisters and mother Superiors; this is frequently expressed in her letters.

As one would expect from a Hollywood film, there was a some suggestion of a romantic involvement with the Miller’s son. This was made up for the benefit of the movie. There was no close friendship, although she did once go to the house after an apparition. In fact, during the time of the apparitions, Bernadette was only 14; Jennifer Jones was 18 when she took the role. Also, the film suggests that the idea for becoming a nun was the idea of Father Perymale, however this is not true; after the apparitions, the idea of becoming a nun became a very strong calling for Bernadette. In fact she longed to become a nun and escape the constant pressures that her fame attracted. Another difference was that in the film, her last words were a prayer to Jesus “pray for me, this poor sinner” – not like the words in the film “I did see her”

The film is good. It gives a fair and moving account of some aspects of Bernadette’s experiences. It is particularly good in her relationship with her parents. It also shows her modesty, strength and conviction in the face of powerful criticism. Yet, if you found the film inspiring, it is worth discovering the true life of Bernadette Soubirous. She willing accepted a life of great sacrifice to try and do justice to the great graces she received. At the request of the Virgin Mary she dedicated her life to praying for sinners.

It is also of interest how the life of a saint can so easily be fictionalised. Over the passing of time, fiction is blended with fact and, if we are not careful, it can become difficult to distinguish between the two. Even during her life, there was a raging dispute over certain details – even though Bernadette gave very clear descriptions. Bernadette was disheartened with one historian, who put his own interpretation on certain events.