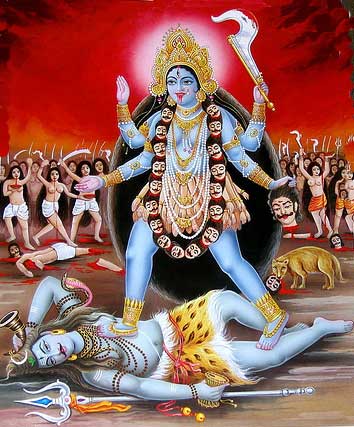 Shiva is the silent, eternal all pervading aspect of the Transcendental Reality. Shiva is often depicted as spending years meditating unperturbed.

Mother Kali is the dynamic aspect of the Transcendental Reality. Kali in Sanskrit literally means ‘time’

Kali is depicted as dancing on Shiva to illustrate the interaction between Shiva the silent, all pervading force and Kali the destroyer of Time. Kali creates the cycles of time on the underlying structure of Shiva.

Kali and Shiva are very close. They could be considered to be the Yin and Yang of creation.

The following excerpt is taken from “The Great Masters and the Cosmic Gods”, by – Sri Chinmoy

Mother Kali is the consort of Lord Shiva. Lord Shiva is the silent aspect of the Transcendental Reality, and Mother Kali is the dynamic aspect of the Transcendental Reality. Truth is complete when it is both dynamic and silent. Truth is complete when the dynamic aspect and the silent aspect function together.

“That is within and that is without.” These conflicting terms cease when our inner consciousness is fully awakened. If something is within, then that very thing also has to be without. If there is a seed, then there will be a tree. If there is a tree, there also is a seed. If the Truth is already there within, then the Truth has to be manifested sooner or later outside.

Mother Kali is the dynamic aspect of the Transcendental Truth and Lord Shiva is the silent aspect of the highest Transcendental Truth. They fulfil the highest Supreme together, like the obverse and the reverse of the same coin. Shiva is silent and Kali is active and dynamic. If we see with our ordinary human eyes, then we say that they are separate. But with our inner eye if we see them, we see that they are together.

From: The Cosmic Gods by Sri Chinmoy

Another story from Indian tradition, which gives insight on Shiva and Kali.

Shankaracharya receives wisdom from a women

“In the beginning, Shankaracharya did not pay attention to women. He felt that women were not suited to spirituality. Then, when he was about to lose the debate to Bharatishastri, it dawned on him that Mother Kali was on Lord Shiva’s chest.

There are two ways to interpret Mother Kali’s pose. Some say that Shiva was giving her all energy, all power, and that is why she was able to kill all the enemies; another way is to say that Shiva was dead and Kali was standing on his chest to revive him. So you can choose whichever explanation you prefer.” [Continue reading]