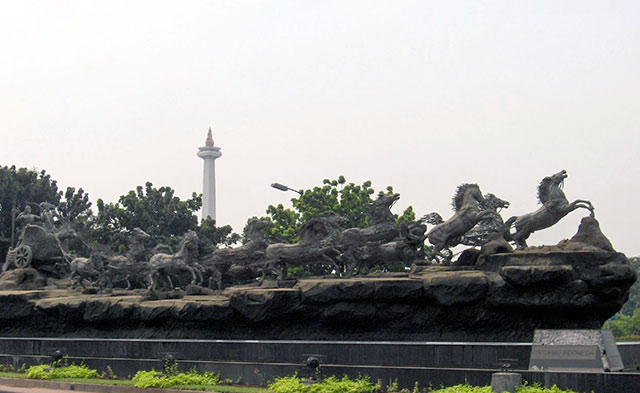 The Gita begins with the words Dharmakshetre Kurakshetre. On the hallowed field of Kurukshetra “this is the literal translation. Kshetra means field. Dharma is a spiritual word, and it is extremely fertile in meanings. It means the inner code of life; moral, religious and spiritual law; living faith in God’s existence and in one’s own existence; soulful duty, especially enjoined by the scriptures; devoted observances of any caste or sect; willingness to abide by the dictates of ones soul.

The Sanskrit root of the word dharma is dhri, to hold. Who holds us God. What holds us – Truth. Dharma prevails. If not always, ultimately it must, for in dharma is the very breath of God.

Duryodhana went to Gandhari, his mother, on the eve of the war, for her benediction. Like mother, like son. Here is a veritable exception. She blessed Duryodhana saying, “Victory will be there, where dharma is.” It meant that Yudhisthira, the son of Dharma, would win the war. She was the possessor of such a selfless heart. Something more. The present world observes her unique dharma in her unparalleled acceptance of her husband’s fate. God gave Dhritarashtra no sight. And Gandhari proved her absolute oneness with her blind husband by binding her own eyes. She embraced blindness – a sacrifice worthy to be remembered and admired by humanity. She saw not the world without. The choice blessings of the world within showered on Gandhari.

Again, people are apt to claim that dharma means religion. If so, how many religions are there? Just one. Certainly not two, not to speak of three. And what does religion signify? It signifies man-discovery and God-discovery, which are one and identical.

To consider the first chapter as an introductory chapter and pay very little importance to it as some scholars, interpreters and readers do, need not be an act of wisdom. The first chapter has a special significance of its own. It deals with Arjuna’s sorrow, his inner conflict. Poor Arjuna was torn with grief between two equally formidable ideas: he must go to war or he must not. Curiously enough, Arjuna’s mother, Kunti Devi, prayed to the Lord Krishna to bless her with perpetual sorrow. Why? Kunti Devi realised that if sorrow deserted her and left her for good, surely there would be no necessity on her part to invoke Sri Krishna. Her world always wanted sorrow, suffering and tribulation, so that her heart could treasure constantly the Lord’s all-compassionate Presence. To a degree, we can recall in the same vein, from Keats’ Endymion,

‘…but cheerly, cheerly she (sorrow) loves me dearly; She is so constant to me, and so kind.’

Actually, from the highest spiritual point of view, we cannot welcome Kunti Devi’s wisdom. Nevertheless, it served her purpose most effectively. A spiritual person has not to embrace sorrow with the hope of achieving God’s Bounty. He has to aspire. His aspiration has to reveal God’s presence within him – God’s Love, Peace, Bliss and Power. He takes sorrow as an experience in his life. He also knows that it is God who is having this experience in him and through him.

True, sorrow purifies our emotional heart. But the divine Light performs this task infinitely more successfully. Yet one has not to be afraid of sorrow’s arrival in one’s life. Far from it. Sorrow has to be transformed into joy everlasting. How? With our heart’s mounting aspiration and God’s ever-flowing Compassion combined. Why? Because God is all joy, and what we humans want is to see, feel, realise and finally become God, the Blissful.

The principal warriors were now seen on both sides. Some were eager to fight in order to display their mighty valour, while there were matchless warriors like Bhishma, Drona and Kripa who fought out of moral obligation. On the battlefield itself, just before the actual battle took place, Yudhisthira walked barefoot to the opposing army, precisely to Bhishma and Drona and other well-wishers, for their benedictions. Bhishma, while blessing Yudhisthira from the inmost recesses of his heart, said, “Son, my body will fight, while my heart will be with you and your brothers. Yours is the Victory destined. ” Drona, while blessing Yudhisthira, exclaimed, ‘I am a victim to obligation. I shall fight for the Kauravas, true. But yours will be the victory. This is the assurance from my Brahmin heart.’

Arrows flew like meteors in the air. Forgotten was the sweet, old affection. Broken were the ties of blood. Death was singing the song of death. Here we may recall Tennyson’s “The Charge of the Light Brigade”

Cannon to right of them,
Cannon to left of them
Cannon in front of them
Volley’d and thunder’d;
Storm’d at with shot and shell,
Boldly they rode and well
Into the jaws of Death.

The cannon had not been invented in days of yore, in the days of the Mahabharata, but the scene of death was the same, with arrows, swords, maces and missiles. Needless to say, we must identify ourselves with the arrows, maces and lion-roars of the Kurukshetra heroes and not with today’s grandiose war-achievements. The joy of knowing the achievements of the hoary past is at once irresistible and unfathomable.

Arjuna exclaimed, ‘Pray, place my chariot, O Krishna, between the two battle formations so that I can see those who thirst for war.’ He surveyed the battle scene. Alas, he saw among the deadly opponents those very human souls whom he had always held dear and near. Overwhelmed with tenebrous grief, Arjuna, for the first time in his life of matchless heroism, gave unthinkable expression to faint-heartedness. ‘My body shivers, my mouth is parched, my limbs give way, fear tortures me all over, my hair stands on end, my bow slips from my hand and my mind is reeling. Hard is it even for me to stand. Krishna, victory over them, my present foes I seek not. They were my own. Still they are. Neither kingdom nor ease I seek. Let them attack, they want and they shall. But I shall not hurl my weapon upon them, not even for the supreme sovereignty of the three worlds, let alone the earth!’

With one moral weapon after another, Arjuna attacked Sri Krishna. He was determined to discard his war weapons for good. He started his philosophy with the correct anticipation of the slaughter of his kinsmen, the dire calamity of family destruction. He emphasised that virtue being lost, family would be caught tight in the grip of vice. This would all be due to lawlessness. When lawlessness predominates, the women of the family become corrupt; women corrupted, caste-confusion comes into existence.

A word about caste-confusion. India is still being mercilessly ridiculed for clinging to the caste system. In fact, caste is unity in diversity. Each caste is like a limb of the body. The four castes: Brahmin (the priest), Kshatrya (the warrior), Vaishya (the agriculturist) and Sudra (the labourer). The origin of the castes we observe in the Vedas. The Brahmin is the mouth of Purusha, the Supreme personified. Rajanya (Kshatriya) is Purusha’s two arms; Vaishya, his two thighs; Sudra, his two feet.

In connection with the caste-destruction, Arjuna also tells the Lord Krishna that everything is leading toward perilous sin. In the Western world, unfortunately, the word ‘sin’ seems to loom large in every walk of life. It is something more fatal than perdition. To them, I beg to be excused, sin is part and parcel of life. In the East, especially in India, the word sin offers a different meaning. It means imperfection, nothing more and nothing less. The human consciousness is proceeding from imperfection to perfection. The Seers of the Upanishads gave no importance to sin. They taught the world the serenity, sanctity, integrity and divinity of man.

To come back to poor Arjuna. Said he: ‘Let the sons of Dhritarashtra, armed with weapons, end my life, while I am unarmed, with no resistance. I prefer in all sincerity my death to our victory!’

Lo, Arjuna, the hero supreme! Discarding his bow and arrows, dolefully, throbbingly and soulfully he sinks into the hinder part of his chariot.

“Fighting is not for Arjuna. Krishna, I shall not fight.”