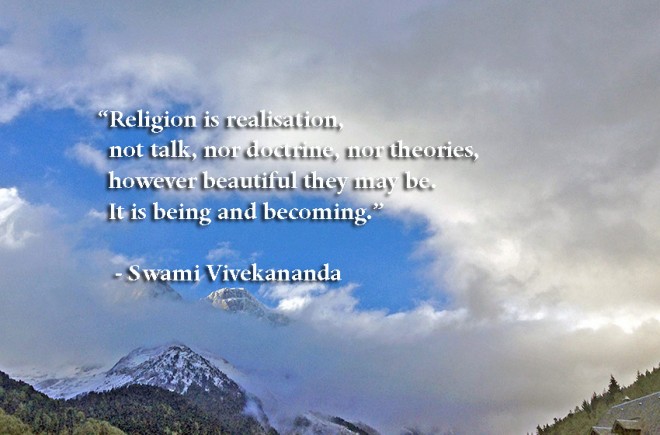 Whatever we experience through our senses is marked by the constant inter-play of opposites, forces of attraction and repulsion or centripetal and centrifugal forces in the external world; or love and hate, or good and evil, in the internal world of our minds. This conflict is particularly marked in the field of religion. Religion expresses itself at three levels, the philosophical, the mythological or historical, and the ritualistic. Each of these three levels is marked by the same conflict of opposites, often taking positions of violent extremes. The greatest harm comes from the fanatic. We may not doubt the sincerity of the fanatic but often he has the irresponsibility of a lunatic. The fanatic is the greatest enemy of mankind.

Given these cleavages, is the idea of the universal religion realistic or just idealistic ? But behind all these differences, we must recognise a deeper level of commonality that suggests that the universal religion already exists, and is constantly evolving and taking clearer shape. No two persons are exactly alike, yet, despite these differences, there is a common thread of humanity.

“If I am sure of anything, it is this humanity, which is common to all …. So it is with the universal religion, which runs through all the various religions of the world in the form of God; it must and does exist through eternity. ‘I am the thread that runs through all these pearls… ‘ (Gita) and each pearl is a religion or even a sect thereof, only the majority of mankind is entirely unconscious of it …..”

“Suppose we all go with vessels in our hands to draw water from the lake. One has a cup, another a jar, another a bucket, and so forth, and we all fill our vessels. The water in each case takes the form of the vessel carried by each of us, but in every case, water, and nothing but water is in the vessel….. God is like that water filling these different vessels, and in each vessel, the vision of God comes in the form of the vessel. Yet He is One…….”

“But is there any way of practically working out this harmony in religions ? … I have also my little plan … In the first place, I would ask mankind to recognise the maxim:

‘Do not destroy’. Iconoclastic religions do no good to this world…… Secondly, take a man where he stands, and from there give him a lift. If it be true that God is at the centre of all religions, and that each of us is moving along one of these radii, then it is certain that all of us must reach that centre. At the centre, where all radii meet, all our differences will cease; but until we reach there, differences there must be …… ”

While the human mind and inclination occur in an innumerable variety, four broad types of men may be recognised for practical purposes : the man of action, the man of emotion, the mystic or man of spirit, and the philosopher or man of intellect. Religion must offer a path for each type to follow, suited to the nature of each type. Ancient religion in India offered four such paths, known as Karma Yoga, Bhakti Yoga, Raja Yoga and Jnana Yoga. These paths transform the selfish to the selfless and lead to Yoga or Union or Realisation of the ultimate Truth.

“It is imperative that all these Yogas should be carried out in practice. Mere theories about them will not do any good. … Religion is realisation, not talk, nor doctrine, nor theories, however beautiful they may be. It is being and becoming, not hearing or acknowledging; it is the whole soul becoming changed into what it believes. That is religion