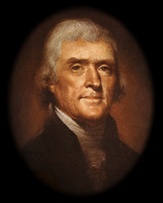 Quotes on Peace and War

” I love peace, and am anxious that we should give the world still another useful lesson, by showing to them other modes of punishing injuries than by war, which is as much a punishment to the punisher as to the sufferer.”

” War has been avoided from a due sense of the miseries, and the demoralization it produces, and of the superior blessings of a state of peace and friendship with all mankind.”

” I value peace, and I should unwillingly see any event take place which would render war a necessary resource.”

” Having seen the people of all other nations bowed down to the earth under the wars and prodigalities of their rulers, I have cherished their opposites, peace, economy, and riddance of public debt, believing that these were the high road to public as well as private prosperity and happiness.”

”  Believing that the happiness of mankind is best promoted by the useful pursuits of peace, that on these alone a stable prosperity can be founded, that the evils of war are great in their endurance, and have a long reckoning for ages to come, I have used my best endeavors to keep our country uncommitted in the troubles which afflict Europe, and which assail us on every side.”

”  I do not believe war the most certain means of enforcing principles. Those peaceable coercions which are in the power of every nation, if undertaken in concert and in time of peace, are more likely to produce the desired effect.”

” We love and we value peace; we know its blessings from experience. We abhor the follies of war, and are not untried in its distresses and calamities.”

” The evils which of necessity encompass the life of man are sufficiently numerous. Why should we add to them by voluntarily distressing and destroying one another? Peace, brothers, is better than war. In a long and bloody war, we lose many friends, and gain nothing. Let us then live in peace and friendship together, doing to each other all the good we can.”

” Born in the same land, we ought to live as brothers, doing to each other all the good we can, and not listening to wicked men, who may endeavor to make us enemies. By living in peace, we can help and prosper one another; by waging war, we can kill and destroy many on both sides; but those who survive will not be the happier for that.”

” I abhor war and view it as the greatest scourge of mankind.”

” I have seen enough of one war never to wish to see another.”

” One war, such as that of our Revolution, is enough for one life.”

“The most successful war seldom pays for its losses.”

“War is as much a punishment to the punisher as to the sufferer.”

” War is an instrument entirely inefficient toward redressing wrong; and multiplies, instead of indemnifying losses.”