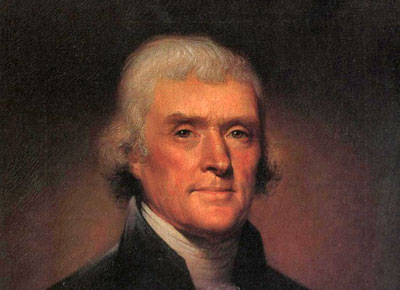 A Decalogue of Canons for Observation in Practical Life

1. Never put off till to-morrow what you can do to-day.
2. Never trouble another for what you can do yourself.
3. Never spend your money before you have it.
4. Never buy what you do not want, because it is cheap; it will be dear to you.
5. Pride costs us more than hunger, thirst, and cold.
6. We never repent of having eaten too little.
7. Nothing is troublesome that we do willingly.
8. How much pain have cost us the evils which have never happened.
9. Take things always by their smooth handle.
10. When angry, count ten, before you speak; if very angry, a hundred.

“I have sworn upon the altar of god, eternal hostility against every form of tyranny over the mind of man.”

(Jefferson discussing the fight over the establishment of one form of Christianity in the U.S. to Dr. Benjamin Rush, September 23, 1800. Peterson, Merrill, ed. Jefferson: Writings. New York: Literary Classics of the U.S.: Distributed to the trade in the U.S. and Canada by the Viking Press, c1984, p. 1082.)

Being True To Yourself

” I am of a sect by myself, as far as I know. When I am led by conversation to express my sentiments, I do it with the same independence here which I have practiced everywhere, and which is inseparable from my nature. I never submitted the whole system of my opinions to the creed of any party of men whatever, in religion, in philosophy, in politics, or in anything else, where I was capable of thinking for myself. Such an addiction, is the last degradation of a free and moral agent. If I could not go to heaven but with a party, I would not go there at all. ”

” If there be one principle more deeply rooted than any other in the mind of every American, it is, that we should have nothing to do with conquest. The energies of the nation, as depends on me, shall be reserved for improvement of the condition of man, not wasted in his destruction. The lamentable resource of war is not authorized for evils of imagination, but for those actual injuries only, which would be more destructive of our well-being than war itself. Peace, justice, and liberal with all the nations of the world, will, I hope, with all nations, characterize this commonwealth. Friendly nations always negotiate little differences in private. I hope our wisdom will grow with our power, and teach us, that the less we use our power, the greater it will be. ”

“Every man, and every body of men on earth, possesses the right of self-government. They receive it with their being from the hand of nature. Individuals exercise it by their single will; collections of men by that of their majority; for the law of the majority is the natural law of every society of men. All, too, will bear in mind this sacred principle, that though the will of the majority is in all cases to prevail, that will, to be rightful, must be reasonable; that the minority possess their equal rights, which equal laws must protect, and to violate which would be oppression. Let us, then, fellow citizens, unite with one heart and one mind. ”

” The most effectual means of preventing the perversion of power into tyranny are to illuminate, as far as practicable, the minds of the people. It is an insult to our citizens to question whether they are rational beings or not, and blasphemy against religion to suppose it cannot stand the test of truth and reason. Light and liberty go together. I look to the diffusion of light and education as the resource most to be relied on for ameliorating the condition, promoting the virtue, and advancing the happiness of man. Enlighten the people generally, and tyranny and oppressions of body and mind will vanish like evil spirits at the dawn of day. If a nation expects to be ignorant and free, in a state of civilization, it expects what never was and never will be. No nation is permitted to live in ignorance with impunity. ”