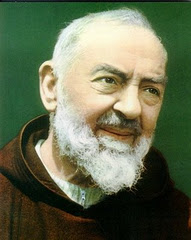 Padre Pio of Pietrelcina was a Capuchin monk (an order of friars in the Catholic Church). During his life time he performed many miracles. Through a mystical experience he received the five wounds of the Christ (the wounds of the stigmata) – two on his feet, two on the palms of his hands and one on the side near the heart. Attracted by his miracles people flocked to him from all corners of the globe. Yet it was not his miracles but it was his love – his love for God and his love for man that won people’s hearts. He once wrote, “I am devoured by the love of God and the love of my neighbor. God is always fixed in my mind and stamped in my heart. I never lose sight of Him. I can admire His beauty, His smiles, His vexation, His mercy, His vengeance, or, rather, the rigors of His justice….”1

Padre Pio’s only desire was “to be a poor friar who prays”. He did not take any credit for the miracles that he performed. For him these miracles were “gifts” that came from God and they belonged to God. When his friend Angelo Battisti once questioned him about these things, Padre Pio replied: “Angelo, they are a mystery for me too.”2 Italian journalist, Renzo Allegri, writes, “I was extremely impressed, not so much by the stories of miracles that people told about him but by the extraordinary moral strength that emanated from his whole being…When he would lift his head and look around, his big eyes looked like they were burning, not from pain but from a goodness that he could not contain.”3

Unlike most people when Padre Pio prayed, God literally spoke to him either through a word or a vision. In a letter to his spiritual director Padre Pio wrote, “My ordinary way of praying is this: hardly do I begin to pray than at once I feel my soul begin to recollect itself in a peace and tranquility that I cannot express in words…” Sometimes Padre Pio felt “touched by the Lord … in a way that is so vivid and so sweet that most of the time I am constrained to shed tears of sorrow for my infidelity and for the tender mercy of having a Father so loving and so good as to summon me thus to His presence.”4 Padre Pio once told his friend Padre Agostino that from early childhood he had seen and spoken to Jesus, the Virgin Mary, and his guardian angel. He thought this was something that happened to everyone. “Don’t you see the Madonna?” he asked his friend. When Agostino denied this, Padre Pio shrugged his shoulders and said, “Surely, you’re saying that out of humility.”5
END_OF_DOCUMENT_TOKEN_TO_BE_REPLACED

This video is a very nice interview with Atmananda, one of the principal assistants of the great yogini Anandamayi Ma. Anandamayi Ma grew up in Bengal, which was also the birthplace of other great Masters such as Sri Ramakrishna, Swami Vivekananda, Paramhansa Yogananda and Sri Chinmoy. She spent almost sixty years of her life going from one place to another across the vast Indian subcontinent, where crowds of people would throng to see her in the blissful consciousness that gave rise to her name (Anandamayi=’filled with bliss’)

The interviewee, Atmananda, is Austrian by birth and came to India in 1935 to teach English in the Indian city of Benares. She met Anandamayi Ma in 1943. Later on she was to quit her school job and remain with Anandamayi Ma on her travels, translating many books of her sayings from Bengali to English and editing an English. The interview takes place in 1981, the year before Anandamayi Ma left her mortal frame.

By this time, Anandamayi Ma was very well known, and the video mentions the masses of people coming to see her. One interesting thing about the video is that Atmanada says she rarely sees Anandamayi Ma these days because of the crowds, but the inner connection she feels with Anandamayi Ma when she does her translating work makes this physical separation negligible.

“…they do not order me to disobey the Church, but God must be served first.” – Joan d’Arc at her trial. 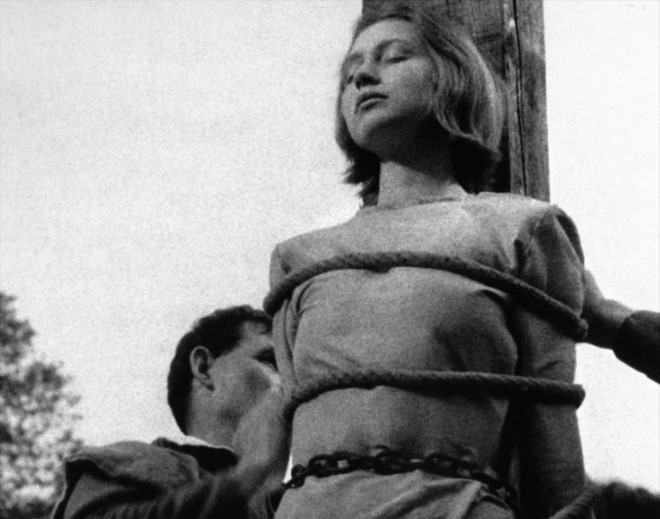 Directed by Robert Bresson the trial of Joan of Arc is a fascinating perspective of the show trial of, Joanne d’Arc, the patron saint of France. The striking feature of the film is its simplicity. There is nothing staged for dramatic or emotional effect. Bresson adds nothing to complicate or distract from the essence of this extraordinary trial. Bresson leaves it to the power of the words and the austere setting to create a thought provoking and very realistic account of this fascinating trial. The simplicity and power of the film comes from Robert Bresson’s decision to remain as faithful as possible to the exact transcript of the trial. By good fortune, all of Jeanne’s questions and answers were written down. From these extracts, and her later rehabilitation trial 25 years after her death, Bresson is able to deliver a realistic and compelling insight into the final moments and inner thoughts of Jeanne d’Arc. As with many of his other films, Robert Bresson chose not to use professional actors. He believed that real actors often hide behind their stage personae. When watching a great actor, he feels that, sometimes we struggle to separate the actor from the character. Bresson felt by using non professional actors it would help them to get at the heart of the character, unencumbered by previous roles. In this film, Florence Delay, who provides a performance of great dignity and intensity, played the lead character of Jeanne D’arc. Florence manages to capture Jeanne’s quixotic mix of gentleness, spirituality and, on occasions, a forceful insolence to the questioning of her interrogators. The performance gives a revealing insight into the intrepid, and resolute character of Jeanne. Yet despite her bravery and courage, the trial was obviously a severely testing time; she has no counsel or sympathisers. The simple black and white shots of her room, chains and interrogators give an unsentimental portrayal of her darkest hours. For example, in one scene, we see a brick thrown through her window. In a sense of desperation Jeanne replies: “Where are my people? Why have they deserted me?”

(Jeanne was betrayed by King Charles II, who she helped gain the throne. He never attempted to rescue her. ) Throughout the film we get a glimpse into the life of a Saint, but with the very real human qualities of fear and desperation; it is a powerful combination. The drama of the film comes from the intense battle of wits between Bishop Cauchon and Jeanne d’arc. Jeanne speaks on her mystical experiences with neither hesitation nor fear. It expresses a remarkable confidence and sincerity. “I believed it at once, and I had the will to believe it. When Saint Michael came to me, he said to me: ‘Saint Catherine and Saint Margaret will come to thee; follow their counsel; they have been chosen to guide thee and counsel thee in all that you have to do: believe what they shall tell thee, it is the order of Our Lord.’ ”

At other times we see her sincere pride in her leadership and mission: “Which did you care for most, your banner or your sword?” (interrogators) “Better, forty times better, my banner than my sword!” (Jeanne d’Arc)

We see Jeanne portrayed not as a romanticised Saint, but as a real person, aware of a very specific mission, but on the other hand aware she also displays a genuine humility. “I do not know if it be the Will of God. Without the grace of God I should not know how to do anything.” (Jeanne)

It is also worth briefly mentioning the role of Bishop Chaucon whom Jeanne D’Arc refers to as my chief enemy) In previous films, he is portrayed in a very unflattering light; this film shows him in a more sympathetic light. Whilst not excusing his actions, we do get to understand his mindset which lead him to such a course of action. It seems Bishop Chaucon sincerely felt he had a divine duty to save the immortal Soul of Jeanne d’Arc. Throughout the film the powerful academics and church hierarchy endeavour to make Jeanne d’Arc submit to the will of the Church. Many times they ask her, “Will you submit to the authority of the Church.?

The answer of Joan, which sticks vividly in the memory. “they do not order me to disobey the Church, but God must be served first.”

Under intense pressure, by the stake, after weeks of solitude and being deprived of any material or spiritual comfort, Jeanne did retract her actions, signing a confession. But this relapse did prove temporary, and after 1 night, she retracted her previous confession and was burned at the stake. It is testament to her extraordinary capacity to inspire others that 500 years after her death, the life of Joan d’Arc has created and ever growing compilation of studies, films and novels. This film gives one of the most penetrating insights into her actual character. We feel it is a realistic portrayal of her final moments, unspoilt by the imagination of the directors and artists. 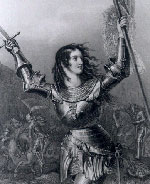 As a young girl, St Therese’s greatest wish was to become a Saint. At the age of 15 she felt God was calling her to enter into a religious order. As the convent would not accept somebody so young, she travelled to the Vatican to personally petition the Pope. Soon after her heart’s desire was filled and she became a nun of the Carmellite order in Lisieux.

St Therese died at the age of only 24, however she left behind a rich treasure of writings which spelt out her approach to the spiritual life. Her belief was that if one should try to do everything, even the smallest things, with an attitude of love.

"Love!…that is what I ask…I know but one thing now – to love Thee, O Jesus! Glorious deeds are not for me, I cannot preach the Gospel, shed my blood…what does it matter? My brothers toil instead of me, and I, the little child, I keep quite close to the royal throne, I love for those who fight."

Until two days before her death Therese wished to be alone at night; however, notwithstanding her entreaties, the infirmarian used to rise several times to visit her. On one occasion she found our little invalid with hands clasped and eyes raised to Heaven.

"But what are you doing?" she asked; "you should try to sleep."

"I cannot, dear Sister, I suffer too much! then I pray…"

"And what do you say to Jesus?"

Dilip Kuamar Roy was a rare combination of the a keen intellect and the devotion of a Bhakti. After a certain amount of deliberation, he forsook a materially prosperous life, to enter under the guidance of Spiritual Master, Sri Aurobindo. In his book ?Sri Aurobindo Came to Me? He recalls with great humility and openness his joys and trials of being a spiritual aspirant. Dilip was a supreme singer and musician. His soul stirring songs transport the listener to a realm of heavenly delight, far beyond the domain of worldly thoughts. As Mahatma Gandhi said of him.

?I may make bold to claim that very few persons in India ? or rather in the world ? have a voice like his, so rich and sweet and intense.?