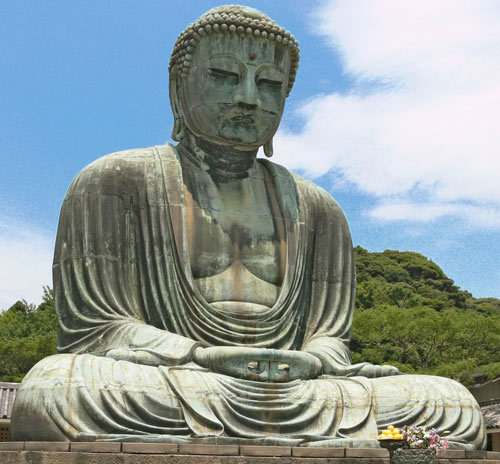 The Great Buddha of Kamakura is a bronze statue of Amida Buddha that is located on the grounds of the Kotokuin Temple. With a height of 13.35 meters, it is the second largest Buddha statue in Japan (the largest is located in the Todaiji Temple in Nara)

Daibutsu – The Great Buddha of Kamakura from kedarvideo on Vimeo.

From Introduction to: Siddhartha Becomes The Buddha by Sri Chinmoy

Other selected parts from the play:

Buddha and Ananda On the passing of Lord Buddha.

The Buddha’s Silence Wins short story on the power of silence.

Conquer The Angry Man by Love – The Quintessence of Buddhism

Photos of Bodhgaya – The Place of Buddha’s Enlightenment.

Conquer the angry man by love.

Conquer the ill-natured man by goodness.

Conquer the miser with generosity.

Conquer the liar with truth.

This week, Vietnam’s most famous exile has returned home – to lead prayers for the dead of a war that ended more than 30 years ago but still haunts the country.

He is an 80-year-old Buddhist monk who has lived outside the country for four decades, and massive crowds are expected to greet him everywhere he goes. Zen master Thich Nhat Hanh is Vietnam’s best-known peace activist and, after the Dalai Lama, is probably the most influential Buddhist spiritual leader in the world.

Like the Dalai Lama, he has spent half his life in exile. A best-selling author, he is feted in Europe and the US, but he was barred from his own land by the US-backed South Vietnamese government and the communist regime that displaced it.

It was Nhat Hanh who inspired the Rev Martin Luther King to come out publicly against the Vietnam War. He was a close personal friend of Thich Quang Duc, the Buddhist monk who captured the world’s attention when he burnt himself to death in front of television cameras in 1963 to protest against the persecution of Vietnam’s Buddhists.

But Nhat Hanh is not going home to lead any protests. The purpose of his visit, according to the monastery where he is based in France, is reconciliation. At the heart of the trip will be three huge prayer sessions for the dead of the war. His followers have called for people of all faiths to join with their own prayers, and even for atheist communists to read favourite passages from Marx.

Quite an interesting story, a little outdated now but still worth mentioning.

A young boy by the name of Ram Bomjan decided to meditate under a tree continuously for several months. His followers claimed that during this time he didn’t take any food or water. When his activities were observed by a Nepalese government team who gained permission to observe the boy continually for 48 hours. They found that to their amazement, he did remain rigid and focused in meditation.

Back in March he disappeared, perhaps because of all the interest he was receiving. Many locals believe he has gone to meditate in peace away from the glare of the media spotlight.

I feel the boy is genuine. That does not necessarily mean he is a reincarnation of the Buddha. But he seems an advanced soul who has practised meditation sincerly before. Whether he is eating or not. It is worth noting there are not many 16 year old boys who can still still motionless for 10 minutes. Let alone practically all day. His parents say as a young boy he had a particular strong sense of compassion for living creatures.

Gaya is located at a distance of 105 km from Patna in the state of Bihar. Buddha Gaya is located 7 miles south of Gaya and is one of the well visited Buddhist pilgrimage centers of the Indian subcontinent.

"The Bodhi tree under which the Buddha attained enlightenment is considered to be the among the oldest and the most venerated tree in the world. This tree is said to be a descendant of the original tree, a branch of which was transplanted at Anuradhapura in Sri Lanka during the period of Emperor Ashoka the great. It is believed that Emperor Ashoka’s Guru Upagupta led him to various holy sites in the Buddhist tradition, including this tree at Gaya. "

Related Links on the Buddha

I COBBLED THEIR BOOTS

How could I love my fellow men who tortured me?

striking me hundreds of times
in the face, scarring me
forever.

I cried out for God to help, until I fainted.

That night in a dream, in a dream more real than this world,
a strap from the Christ’s sandal
fell from my bleeding
mouth,

and I looked at Him and He
was weeping, and
spoke,

“I cobbled their boots;
how sorry
I am.

What moves all things
is God.”

From Poetry of St John of the Cross

The poem is from “Love Poems From God” and are translated by Daniel Ladinsky, well known for his poetic versions of Hafiz.

St John of the Cross is widely regarded as one of the great mystical poets who lived in Spain during the 16th Century. As a young Carmelite friar John met St Teresa of Avila and became profoundly moved by her radiant spirituality. In 1577 St John was kidnapped and  imprisoned for his support of the reforms to the Carmelite movement. For several months he suffered appalling conditions and regular beatings, amounting to torture. However throughout this experience he came even closer to the divine and amidst the beatings and squalor experienced visions and ecstasy’s. This poem is based on one such vision during his imprisonment.

This poem is from “Love Poems From God” and are translated by Daniel Ladinsky, well known for his poetic versions of Hafiz.

Drink your tea slowly and reverently,
as if it is the axis
on which the world earth revolves
– slowly, evenly, without
rushing toward the future;
Live the actual moment.
Only this moment is life.

Thich Nhat Hanh is a vietnamese Buddhist monk who has written many poems and teaches a form of engaged Buddhism.