Thursday, October 11, 2007 – A lifetime dedicated in the service of humanity has ended with the passing of Sri Chinmoy, the global humanitarian, meditation teacher and advocate of the boundless potential of the human spirit, at the age of 76 in his New York home. In the 43 years since he arrived in the America in 1964, Sri Chinmoy had turned his life into a living example of his firm conviction that, in his words, "the answer to the world’s problems is for each one of us to go beyond our current capacities and become better". Even now, as people from all countries, religions, cultures and walks of life gather to pay tribute to him, it is not the death of his mortal frame that comes most to mind, but the immortal spirit that lay behind his tireless contributions to the evolution of human consciousness.

What truly sets Sri Chinmoy’s work apart is the sheer variety of avenues through which he gave wings to this vision. In fields as diverse, art poetry, music and athletics, Sri Chinmoy left his own indelible mark that inspired all who came across it to in turn better themselves in their own sphere of talent. In exploring such a wide variety of endeavours, he sought to demonstrate that no matter where our talents lie, they can be put to use for the betterment of the world. In each field of activity, Sri Chinmoy embarked upon new challenges with an enthusiasm, poise and imagination that flowed directly from his deep inner awareness of the limitless capacity of the soul. His output in the creative fields was enormously prolific – 20,000 songs, over 100,000 poems and 200,000 pieces of mystical art, to name just some of his achievements: his inner feeling was that the quantity of his output need not be a hindrance to its quality, and so he kept on creating with the spontaneity of a child:

"If we know how to pray and meditate to gain a free access to the world of inspiration, if we have an inner communication with our Pilot Supreme, then quality and quantity can go together."

In addition, his many grassroots initiatives aimed at uniting his fellow beings behind the vision of a world based on harmony and oneness won him a unique position as a figure above political, religious or regional considerations, a person with truly the betterment of the world at heart. These initiatives included the World Harmony Run, an Olympic-style global relay which crossed the world seeing for themselves how the best qualities of humanity – kindness, empathy, largeness of heart – were qualities that could be found anywhere, and then spreading that message to everyone they met along the route. In 1990, he founded the Oneness-Heart Tears and Smiles humanitarian initiative, which provided aid to 24 countries with a philosophy based on recognizing that those we ‘give’ to are in fact giving us much more by enabling us to expand our heart. Sri Chinmoy was repeatedly honoured during his life, receiving the UNESCO Nehru medallion and the Mahatma Gandhi award, and being twice invited to hold the opening meditation for the Parliament of World religions in 1997 and 2004.

Every facet of Sri Chinmoy’s work spoke of the timeless and eternal qualities of the human soul, a timelessness that feels alive and vibrant even now, even if its creator has left his mortal abode. He often spoke of life and death being merely two sides of the same coin:

"We have a short span of life, say forty, sixty or eighty years; then we pass behind the curtain of Eternity. There is an eternal Life. This Life existed before the creation, it exists now in the creation, then it passes through death and it goes beyond death and enters again into its own realm….It had no beginning and it has no end. It existed, it exists and it will forever exist. Through our meditation, when we realise God, when we stay in God, we become the possessor of that eternal Life. Consciously we go beyond the veil of death and we remain in the eternal Life, which has neither beginning nor end."

His last weeks on earth did not see any slowing down in his activities – in the middle of September, he had travelled to the Russian city of St. Petersburg to give concerts of meditative music, and just the day before his passing he was composing more songs to add to his existing total of over twenty thousand, as well as hosting a meditation function for his students.

I feel in all my limbs His boundless Grace;
Within my heart the Truth of life shines white.
The secret heights of God my soul now climbs;
No dole, no sombre pang, no death in my sight.

No mortal days and nights can shake my calm;
A Light above sustains my secret soul.
All doubts with grief are banished from my deeps,
My eyes of light perceive my cherished Goal.

Though in the world, I am above its woe;
I dwell in an ocean of supreme release.
My mind, a core of the One’s unmeasured thoughts;
The star vast welkin hugs my Spirit’s peace.

My eternal days are found in speeding time;
I play upon His Flute of rhapsody.
Impossible deeds no more impossible seem;
In birth chains now shines Immortality.

"We must realise that a life of failure is never permanent."

"Patience is the most sublime progress in disguise."

Forgiveness
Is mightier
Than the mightiest.

Negativity
Eventually digs
Its own grave

No human being
Shall remain
Indefinitely unrealised 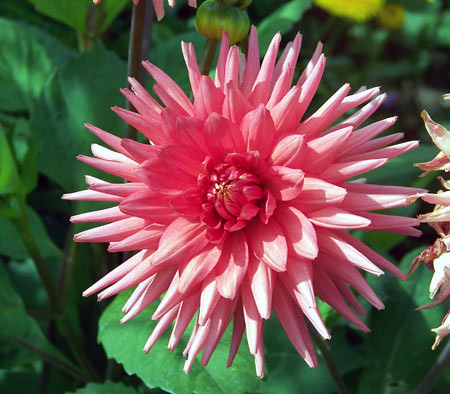 When this world of ours

There was only one thing:

From: My Christmas-New Year-Vacation-Aspiration-Prayers, Part 21

Verse from The Upanishads:

From Delight we came into existence.

In Delight we grow.

At the end of our journey?s close,

Into Delight we retire.

Selections from the Upanishads

No more my heart shall sob or grieve.
My days and nights dissolve in God’s own Light.
Above the toil of life my soul
Is a Bird of Fire winging the Infinite.

I have known the One and His secret Play,
And passed beyond the sea of Ignorance Dream.
In tune with Him, I sport and sing;
I own the golden Eye of the Supreme.

Drunk deep of Immortality,
I am the root and boughs of a teeming vast.
My Form I have known and realised.
The Supreme and I are one; all we outlast.

Poem from: My Flute

Criticism has no peace
Either in the inner world
Or the outer world.

Forgiveness
Is mightier
Than the mightiest