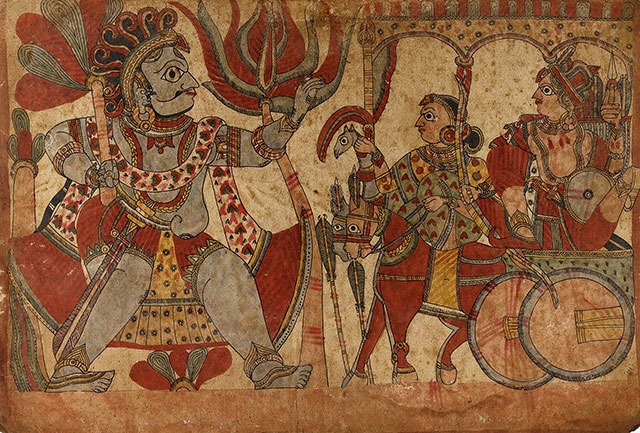 The Mahabharata is India’s greatest epic. ‘Mahabharata’ means ‘Great India,’ India the Sublime. This unparalleled epic is six times the size of the Iliad and the Odyssey combined.

The great sage Vyasa was inspired to write this epic, but he found that it was impossible for him to write it all down. So he prayed to Brahma, the Creator.

In the Hindu Trinity, Brahma is the Creator, Vishnu the Preserver, Siva the Transformer. Vyasa prayed to Brahma and Brahma descended in human form. The sage said to Brahma, “Please send me someone who can write down what I say.” Brahma said, “Well, there is only one person on earth who can do that, and that is Ganapati. You invoke him, he can take down your dictation.” So he invoked Ganapati, the son of Lord Siva.

Ganapati came and agreed to write on one condition. The condition was that Vyasa could not pause; he had to dictate continuously, without interruption. If he hesitated or if he paused, then Ganapati would leave him. Vyasa consented and said, “Now, I also want to dictate to you on one condition, and that condition is, that unless and until you know the meaning of what I dictate you will not write. You have to wait and ask me if there is anything you do not comprehend.”

Vyasa was very clever. He thought that he would use complex sentences and it would take time for Ganapati to understand them, and in the meantime he would be able to get more inspiration and get ready for dictation.

Thus the Mahabharata was composed.

From: Tales of the Mahabharata by Sri Chinmoy
Published by Citadel Books

(Picture top: On the road to Dwarka from the Mahabharata)