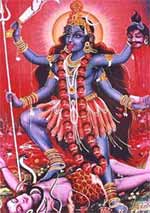 O Mother-Fire! Thy storm-eyed ken
Tortures my eyeless fate.
Before me shine all wonder-ways
Of thy immortal Gate.
The face of rapture thy stroke unveils.
Matchless forever Thou art
To make us reach the Peak unknown,
The One’s all-embracing Heart.
The fount of Power at thy Feet abides.
Thy cosmic dance of Noon
Throws fast on earth the nectar-floods
Of snow-white fire-pure Moon.

In another aspect the Mother Divine is called Mahakali. In this aspect she is the warrior Mother who is fighting all the time against the hostile forces, against human imperfection, limitation, bondage and death. At the same time, she is all Compassion for the sincere seekers. In all Her divine aspects, the transcendental Mother is full of Compassion, but in this aspect she is undoubtedly the Mother of supernal Compassion. Mahakali has more Compassion than the others, for she does not allow anyone to cherish imperfection in the physical plane, the vital plane, the mental plane, or in any other plane. It is her infinite Compassion that frees men from the fetters of ignorance.

On the one hand, Kali looks absolutely terrifying and ferocious when she comes down to the vital plane of human ignorance. But on the other hand, she is very, very compassionate. She sheds bitter tears when she sees that anyone is wallowing in the pleasures of ignorance instead of trying to transcend his limitations, ignorance, darkness and death. So she fights against our enemies for us.

Mahakali is the Mother of aspiration. She has great fondness for height, for the highest transcendental Height. If she is satisfied with a seeker, then in no time she will carry that particular seeker to the highest transcendental Height. She is also the Mother of fastest speed. She has the capacity to expedite the seeker’s progress in the twinkling of an eye. She takes the aspirant to his Goal infinitely faster than the other cosmic gods and goddesses. In a single day she can give him the progress which otherwise might have taken him fifty or sixty years to make. Those who want to make quick progress in the spiritual life, and those who want to attain to spiritual perfection as soon as possible, need the assistance, help, guidance and protection of this particular goddess for special Grace.

Kali quite often exercises this dynamic power of transformation, but she does it only for those who have boundless and implicit faith in her, for those who feel that at every moment they can be divine heroes dedicated to fulfilling her cause here on earth. Her to fulfil here on earth should be the aim of the hero-worshipper of the Mother Kali.

This Mother demands absolute sincerity, purity and one-pointedness in the consciousness of those who want to adore her and worship her. Only on these conditions will she accept a devotee. She has no time to wait for insincere seekers. There are other gods and goddesses, especially the goddess Lakshmi, who will tolerate insincerity. They wait with their love and compassion for the seekers who are only half sincere, but Kali is very strict and will not do that. She wants absolute sincerity and purity immediately and then only will she take one to the highest Transcendental Abode of the Supreme.

The pure gold colour which represents the divine manifestation, is the true colour of the Mother Kali. In the highest plane she is absolutely golden, although most pictures show her as black. She often looks black because she has entered into the vital worlds of aspirants who are still impure but who want to be purified in order to transform their consciousness. When she sees that an aspirant is really sincere and dedicated, she enters into his vital and destroys for good the lower vital movements that have to be destroyed and transforms whatever can be transformed into higher aspects of Divinity.

I am sure most of you have heard of the very great spiritual Master Sri Ramakrishna. The Goddess Kali was his Divine Mother. It was Mother Kali whom he worshipped and adored; it was with Mother Kali that he established his ultimate transcendental Connection and Union. There came a time when Sri Ramakrishna’s consort, Sarada Devi, found no difference between Mother Kali and her husband, who was also called Thakur. She would say, “Where is Kali? Who is Kali if not Thakur.”

As for myself, I personally regard Kali as my dearest Mother. This aspect of the Divine is most dear to me. In India all families without exception have a family deity and our family deity is Kali.

Mother Kali is the consort of Lord Shiva. Lord Shiva is the silent aspect of the transcendental Reality and Mother Kali is the dynamic and active aspect of the transcendental Reality. If we think of Shiva and Kali with our ordinary human mind, then we separate them; but if we look at them with our inner eye, then we see that they go together. Truth is complete and we are fulfilled when the dynamic aspect and the silent aspect function together. God in His feminine aspect, God the Mother, is Mahakali. God in His masculine aspect, God the Father, is Lord Shiva.

Those in the West who want power, but who have no feeling for any Indian goddess or deity, can directly invoke the power aspect of God: God the Power. He has Compassion. He has Love. He has everything. So if we pray to God the Power, the indomitable Power, we will get the same blessings as we can get from this particular goddess.

In one of our Upanishads it is mentioned that the ultimate Truth is: “That is far and at the same time is near. That moves and that moves not. That is within, that is without.” It is within and without. When our inner consciousness is fully awakened, we see that if something is within, that very thing also has to be without. If we have sown a seed, then it will germinate and there will be a tree. If the truth is already there within, then the truth has to be manifested sooner or later outside.

Excerpt from The Dance Of The Cosmic Gods by Sri Chinmoy.