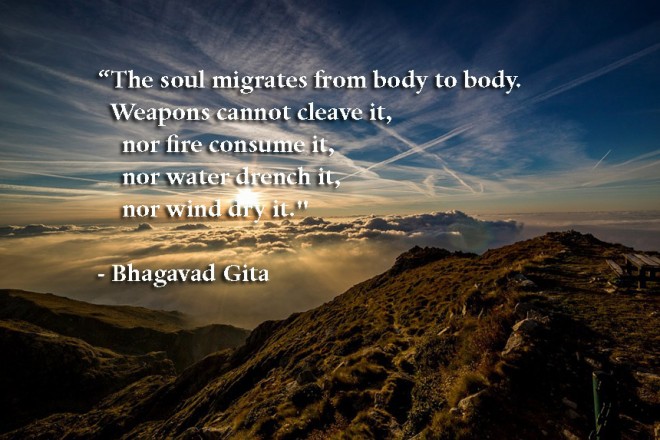 A commentary on the significance of death in the Bhagavad Gita
by Sri Chinmoy.

“He who lives the inner life knows that death is truly his resting-room. To him, death is anything but extinction. It is a meaningful departure. When our consciousness is divinely transformed, the necessity of death will not arise at all. To transform life, we need Peace, Light, Bliss and Power. We cry for these divine qualities. They cry for our aspiration. They are equally anxious to grant us everlasting life. But until our body, vital, mind, heart and soul aspire together, the divine Power, Light, Bliss and Peace cannot possess us.

The body has death, but not the soul. The body sleeps, the soul flies. The soul-stirring words on death and the soul in this chapter of the Gita, let us recollect. “Even as man discards old clothes for the new ones, so the dweller in the body, the soul, leaving aside the worn-out bodies, enters into new bodies. The soul migrates from body to body. Weapons cannot cleave it, nor fire consume it, nor water drench it, nor wind dry it.” This is the soul and this is what is meant by the existence of the soul. Now we shall be well advised to observe the existence of death, if there is any, in the momentous words of Sri Aurobindo, the Founder of the integral Yoga. “Death, he exclaims, “has no separate existence by itself, it is only a result of the principle of decay in the body and that principle is there already” it is part of the physical nature. At the same time it is not inevitable; if one could have the necessary consciousness and force, decay and death is not inevitable.”

What we call death is nothing short of ignorance. We can solve the problem of death only when we know what life is. Life is eternal. It existed before birth and it will exist after death. Life also exists between birth and death. It is beyond birth and death. Life is infinite. Life is immortal. A seeker of the infinite Truth cannot subscribe to Schopenhauer’s statement: “To desire Immortality is to desire the eternal perpetuation of a great mistake.” There is no shadow of doubt that it is the ceaseless seeker in man who is Immortality’s Life, for his very existence indicates the Supreme’s Vision that illumines the universe, and the Supreme’s Reality that fulfils creation.

Arjuna the disciple further learned: “Do your duty. Do not waver. Be not faint-hearted. You are a Kshatriya. There can be no greater invitation than that of a righteous war for a Kshatriya.”

A warrior’s duty is to fight, fight for the establishment of truth. “In his victory, the entire earth becomes his, in his death, him welcome the gates of paradise.”

Sri Krishna unveiled the path of Sankhya (knowledge) to Arjuna: “Arjuna, take them as one, victory and defeat, joy and sorrow, gain and loss. Care not for them. Fight! Fighting thus no sin will you incur.” The teacher revealed the path of knowledge (Sankhya). Now he wanted to teach the student the path of action (Yoga). Arjuna surprisingly learned that this path, the path of action, the second path, is fruitful and also will bring him deliverance. The truth sublime is:”Action is your birthright, not the outcome, not the fruits thereof. Let not the fruits of action be your object, and be not attached to inaction. Be active and dynamic, seek not any reward.” We can simultaneously kindle the flame of our consciousness with the lore of the Isha Upanishad: “Action cleaves not to a man.”

We have already used the term Yoga. What is Yoga? “Equanimity,” says Sri Krishna, “is Yoga.” He also says: “Yoga is skilful wisdom in action.”

Arjuna’s inner progress is striking. He now feels the necessity to free himself from the desire-life. Sri Krishna teaches him how he can totally detach himself from the bondage-life of the senses as a tortoise successfully withdraws its limbs from all directions. Sense-withdrawal, or withdrawal from the sense objects, by no means indicates the end of man’s journey. “Mere withdrawal cannot put an end to desire’s birth. Desire disappears only when the Supreme appears. In His Presence the desire-life loses its existence. Not before.”

This second chapter throws considerable light on Sankhya (knowledge) and Yoga (action). Sankhya and Yoga are never at daggers drawn. One is detached meditative knowledge, and the other is dedicated and selfless action. They have the self-same Goal. They just follow two different paths to arrive at the Goal.

To come back to the sense-life. Sense-life is not to be discontinued. Sense-life is to be lived in the Divine for the Divine. It is the inner withdrawal, and not the outer withdrawal, that is imperative. The animal in man has to surrender to the Divine in man for its total transformation. The life of animal pleasure must lose its living and burning breath in the all-fulfilling life of divine Bliss.

Katha Upanishad declares the rungs of the ever-climbing Ladder.

We have seen what happens when we go up. Let us observe what happens when we muse on the sense-objects. The Gita tells: “Dwelling on sense-objects gives birth to attachment, attachment gives birth to desire. Desire (unfulfilled) brings into existence the life of anger. From anger delusion springs up, from delusion the confusion of memory. In the confusion of memory the reasoning wisdom is lost. When wisdom is nowhere, destruction within, without, below and above.”

The dance of destruction is over. Let us pine for salvation. The disciplined, self-controlled aspirant alone will be blessed by the flood of peace. Finally, the aspirant will be embraced by Salvation, the inner Illumination.

– Sri Chinmoy, Commentary on the Bhagavad Gita: the Song of the Transcendental Soul, Agni Press, 1971

Quotes from the Bhagavad Gita on Death

Thou seest Me as Time who kills, Time who brings all to doom,
The Slayer Time, Ancient of Days, come hither to consume;
Excepting thee, of all these hosts of hostile chiefs arrayed,
There shines not one shall leave alive the battlefield!

Thou seest Me as Time who kills, Time who brings all to doom,
The Slayer Time, Ancient of Days, come hither to consume;
Excepting thee, of all these hosts of hostile chiefs arrayed,
There shines not one shall leave alive the battlefield! Dismayed
No longer be! Arise! obtain renown! destroy thy foes!
Fight for the kingdom waiting thee when thou hast vanquished those.
By Me they fall—not thee! the stroke of death is dealt them now,
Even as they stand thus gallantly; My instrument art thou!
Strike, strong-armed Prince! at Drona! at Bhishma strike! deal death
To Karna, Jyadratha; stay all this warlike breath!
’Tis I who bid them perish! Thou wilt but slay the slain.
Fight! they must fall, and thou must live, victor upon this plain!

Others suggest a translation as:

“Now, I am become time the destroyer of worlds.”