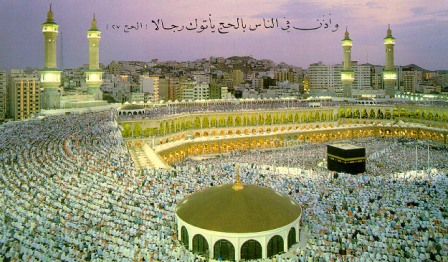 He is the One GOD; the Creator, the Initiator, the Designer.
To Him belong the most beautiful names.
Glorifying Him is everything in the heavens and the earth.
He is the Almighty, Most Wise.

Islam began in Arabia and was revealed to humanity by the Prophet Muhammad (peace be upon him). Those who follow Islam are called Muslims. Muslims believe that there is only one God, called Allah.

Muslims believe that Islam is a faith that has always existed and has been gradually revealed to humanity through earlier prophets such as Abraham and Jesus Christ. However the final revelation of faith was made through the Prophet Muhammad (peace be upon him) in the 7th century CE.

Muhammad was born in Mecca in Saudi Arabia in 570. Mecca is now a place of pilgimage where Muslims try to go at least once in their life.

Mohammed was a deeply spiritual man, and often spent time in meditation on Mount Hira one night in 610 he was praying and meditating in a cave on the mountain when he was visited by the angel Jibreel who ordered him to “recite”. These recitation became known as the Holy Qu’ran, which is the most important Muslim scipture.

The essential message of Islam is that there is no God but Allah, and that a Muslim should live in complete submission/ surrender to the will of Allah. Afterfeeling the authenticity ofthe message that was recited to him,Muhammed began preaching and he attracted many followers. However his popularity was such that he was forced out of Mecca by those who were fearful of his large following. Therefore in 622, he had to travel to Medina. This pilgrimage has a special place inIslam and is the start of theIslamic calender. However within 10 years Muhammed had gained enough followers and he was able to return to Meccan and conquer it from those who had forced him to leave.

Muhammad continued to lead his community both spiritually and in earthly matters until his death in 632.

Both Sunni and Shia muslims accept Mohammed as the final prophet and both share the Holy Qu’ran as the sacred scripture of Islam. The difference between the 2 groups stems from their different opinions about who should succeed Mohammed as the leader of both the fledging religion but also the Islamic State in the Arabian peninsula.

Sunni’s (The largest group) supported a close companion of Mohammed Abu Bakr to be the next caliph.

Shia’s(the smaller Group however supported Mohammed’s son in law, Ali. They believed that leadership should pass to direct descendents of Mohammed.

Sufism is often referred to as the mystical branch of Islam. Sufism is based on the teachings of the Qu’ran and teaches that love is the quickest way to reach the divine.

Some Muslims consider Sufism to be a separate religious tradition.