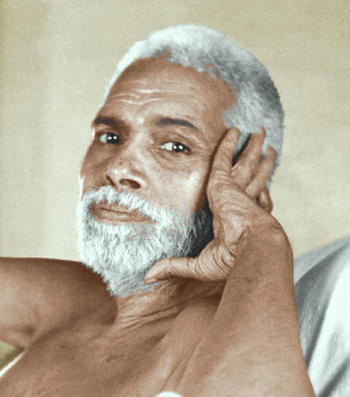 “A person begins with dissatisfaction. Not content with the world he seeks satisfaction of desires by prayers to God; his mind is purified; he longs to know God more than to satisfy his carnal desires. Then God’s Grace begins to manifest. God takes the form of a Guru and appears to the devotee; teaches him the Truth; purifies the mind by his teachings and contact; the mind gains strength, is able to turn inward; with meditation it is purified yet further, and eventually remains still without the least ripple. That stillness is the Self. The Guru is both exterior and interior. From the exterior he gives a push to the mind to turn inward; from the interior he pulls the mind towards the Self and helps the mind to achieve quietness. That is Grace.Hence there is no difference between God, Guru and Self.”

“The master is within; meditation is meant to remove the ignorant idea that he is only outside. If he is a stranger whom you await, he is bound to disappear also. What is the use of a transient being like that? But so long as you think you are separate or that you are the body, an external master is also necessary and he will appear to have a body. When the wrong identification of oneself with the body ceases, the master will be found to be none other than the Self.”

” The mind is a bundle of thoughts. The thoughts arise because there is the thinker. The thinker is the ego. The ego, if sought, will automatically vanish. The ego and the mind are the same. The ego is the root-thought from which all other thoughts arise.”

” The potter’s wheel goes on turning even after the potter has ceased to turn it because the pot is finished. In the same way, an electric fan goes on revolving for some minutes after we switch off the current. The prarabdha – predestined karma – which created the body will make it go through whatever activities it was meant for. But the jnani â&#128;’ the knower – goes through all these activities without the notion that he is the doer of them. It is hard to understand how this is possible. The illustration generally given is that the jnani performs action in some such way as a child that is roused from sleep to eat eats but does not remember next morning that it ate. “

” Reality is simply the loss of the ego. Destroy the ego by seeking its identity. It will automatically vanish and reality will shine forth by itself. This is the direct method.
There is no greater mystery than this, that we keep seeking reality though in fact we are reality. We think that there is something hiding reality and that this must be destroyed before reality is gained. How ridiculous! A day will dawn when you will laugh at all your past efforts. That which will be on the day you laugh is also here and now. “

” Realisation is getting rid of the delusion that you haven’t realised.”

But when you talk of love, there is duality, is there not – the person who loves and the entity called God who is loved? The individual is not separate from God. Hence love means one has love towards one’s own Self.

That inner Self, eternal, ever effulgent, full and infinite Bliss, single, indivisible, whole and living, shines in everyone as the witnessing awareness. That self in its splendour, shining in the cavity of the heartâ&#128;¦
This self is neither born nor dies, neither grows nor decays, nor does it suffer any change.
When a pot is broken, the space within it is not.
Similarly, when the body dies the Self in it remains eternalâ&#128;¦

Peace is your natural state. It is the mind that obstructs the natural state. Investigate what the mind is, and it will disappear. There is no such thing as mind apart from thought. Nevertheless, because of the emergence of thought, you surmise something from which it starts and term that the mind. When you probe to see what it is, you find there is really no such tying as mind. When the mind has thus vanished, you realise eternal peace.

All beings desire happiness always, happiness without a tinge of sorrow. At the same time everybody loves himself best. The cause for love is only happiness. So, that happiness must lie in one. Further that happiness is daily experienced by everyone in sleep, when there is no mind. To attain that natural happiness one must know oneself. For that, Self-Enquiry, ‘ Who am I? ‘ is the chief means.

Nearly all mankind is more or less unhappy because nearly all do not know the true Self. Real happiness abides in Self-knowledge alone.
All else is fleeting.
To know one’s Self is to be blissful always.